In September 1988, as the Intifada gathered force, King Hussein of Jordan announced that he no longer sought sovereignty over the “West Bank”. Palestinian representation in the Jordanian Majlis (Parliament) would cease, as would Jordanian payment of public servants in the West Bank area.

The announcement dealt a blow to prospects of a peace settlement on the basis of the “Jordanian option” proposed in the first Part of the Camp David Accords, and seen as essential in both Labour and Likud proposals.

Then, in November 1988 the Palestinian National Council, meeting at Algiers, adopted a resolution calling for an international conference on the basis of Resolutions 242 and 338 and “all other UN resolutions”. It also made a declaration proclaiming a “Palestinian State”, but without defining its boundaries. The conference also renounced terrorism outside Israel.

Immediately after the Algiers conference, Yasser Arafat held a press conference at which he publicly recognised “for the record” the right of all nations in region “including the State of Palestine and Israel” to live in peace. He also condemned all forms of terrorism including “state terrorism”, but not “resistance”.

Following the Geneva statement in 1988, Arafat repeated his call for an international conference, and demanded a return to the 1947 Partition Resolution boundaries, with Jerusalem as the capital of a Palestinian State. He emphasised that he was not prepared to enter into direct negotiations with Israel.

The US authorised its ambassador in Tunisia to open discussions with the PLO. Israel rejected the Arafat statement as long as the provisions in the PLO Covenant calling for Israel’s destruction remained unchanged, and the Intifada and attempted PLO incursions from Lebanon continued.

On 14 May 1989,Yitzchak Shamir of the Likud party, as Prime Minister in the national unity government, and Yitzchak Rabin of the Labour party, as Defence Minister, proposed a plan, known as the “Shamir-Rabin Peace Plan” aimed at ending the Intifada. The “peace plan” called for elections to be held in the Territories, so that elected representatives could then negotiate the terms of interim self-rule and a permanent settlement, as contemplated by the first Part of the Camp David Accords. Israel still refused to negotiate with the PLO. 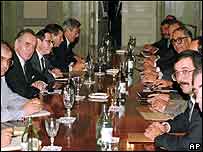 On 30 October 1991, after the first Gulf War against Iraq had demonstrated the absence of effective Soviet power in the Middle East, the Madrid Peace Conference was officially called jointly by the US and USSR, although it was in fact the result of initiatives by US Secretary of State, James Baker. Indeed the conference had become a possibility because the war had demonstrated the dominance of US power in the region, and the equation of forces in the Arab-Israel conflict had dramatically changed.

It was an historic occasion, since for the first time other Arab nations joined Egypt in negotiating directly with Israel, implying recognition of the legitimacy of Israel’s existence. Syria, Egypt, Lebanon and Jordan participated. Since Israel refused to deal with the PLO, the Palestinians participated as part of a joint Jordanian – Palestinian delegation.

After the initial meeting in Madrid the conference moved to Washington. A long process of speechmaking and sub-committee meetings appeared to be moving towards a stalemate. 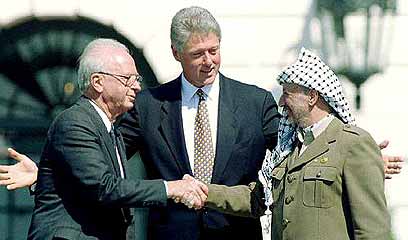 Meanwhile, after the election of the Labour government of Yitzchak Rabin in 1992, secret negotiations began at Oslo in Norway between Israeli and PLO representatives as the Madrid Conference continued. The talks were initiated by Norwegian UNRWA workers, who made contact with Israeli Deputy Foreign Minister Yossi Beilin, and conveyed conciliatory messages from the PLO. Eventually a draft agreement was formulated, and Arafat delivered a letter to Rabin, in which he formally “recognised Israel’s right to exist in peace and security” and “renounced the use of terrorism and other acts of violence” (See Arafat’s Letter to Rabin – 1993)

The formal agreement was then signed on 13 September 1993 at a dramatic ceremony in Washington, by Rabin and Arafat in the presence of President Clinton. (See Rabin – Washington Speech 1993)

The Accords took the form of a Declaration of Principles for a future peace agreement. A Palestinian Interim Self-governing Authority was to be given immediate limited self-government (“Autonomy”) over Gaza and the Jericho area. A timetable was set for election of a Palestinian Authority, redeployment of Israeli forces out of populated areas in the Territories and the negotiation of a final status agreement within five years. That final status negotiation would consider such issues as the settlements, refugees and Jerusalem. (See The Oslo Accords 1993 for extracts)

One consequence of the Accords was the establishment of preliminary diplomatic relationships between Israel and a number of Arab and Islamic nations. Oman and Qatar established low-level diplomatic relations with Israel. However Syria and Iraq remained implacably opposed to recognition of Israel’s legitimacy. There were also economic conferences attended by Israeli and Arab representatives in which future trading relations were discussed. The Boycott imposed by the Arab League was informally at an end. Investment in Israel by European and American interests increased and Israel’s economy grew dramatically.

On the other hand, almost immediately after the Accords were signed there was an outbreak of terrorist activity by the Hamas and the Islamic Jihad. The incidence of terrorist attacks, including a number of suicide bombings, was much greater after the Accords than before. Rabin’s response was to characterise the attacks as an attempt to de-stabilise the peace process, which should not be allowed to succeed: “We will continue the process as if there is no terror. And we will fight the terror as if there is no process.”

In 1994 the Cairo Agreement made detailed provision for times and places of re-deployment of Israeli troops, and established a Palestinian Authority and defined its powers and territory. The public signing in Cairo on 4 May 1994 had its drama, with Arafat refusing to sign the maps until President Mubarak of Egypt took him outside and persuaded him to return and sign.

On 26 October 1994, President Bill Clinton came to Cairo and then to Akaba, the Jordanian port city on the Red Sea, for the signing of a Jordan-Israel Peace treaty. The treaty recognised the centre of the Jordan River as the international boundary “without prejudice to the status of any territories that came under Israeli military control in 1967” and Israel made substantial concessions on water sharing. King Hussein spoke of the “sons of Abraham, united by genuine historical bonds”. The result was a “warm peace” with open borders.

The currently operative (as at 2007) Interim Agreement on the West Bank and the Gaza Strip was signed in Washington in 1995. It included detailed maps of areas A, B and C, to be under exclusive Palestinian, joint, and exclusive Israeli control respectively. Joint control meant Palestinian civil rule with Israeli military presence.

Since the major Arab population centres were in areas A and B, 96% of the population in the Territories (apart from East Jerusalem) now came under Palestinian self-rule. A further timetable for Israeli “redeployment from populated areas” was also set. (See Israeli-Palestinian Interim Agreement 1995 for extracts)

The agreement attracted fierce opposition from the right-wing parties in Israel, with public demonstrations denouncing Rabin. The Knesset ratified the agreement by 61 votes to 59.

See Significance of the assassination of Yitzchak Rabin and the election of Netanyahu in 1996
for detail of the policy of “reciprocity” – withdrawal in exchange for security co-operation, and the Wye agreement.