REASONS FOR THE ISRAELI INVASIONS OF LEBANON IN 1978 AND 1982; AND THE SIGNIFICANCE OF THE WAR FOR ISRAEL AND THE PALESTINIANS

When Lebanon gained its independence with the end of the French mandate in 1946, its population was almost equally divided between Christians and Muslims, with substantial Druze and Armenian minorities. Under French rule an elected legislature had been established, with a convention that the President would be a Maronite Christian, the Prime Minister a Sunni Muslim and the Speaker a Shi’ite Muslim.

During its early years Lebanon enjoyed a measure of prosperity, with Beirut as one of the major banking centres of the Arab world. However, the central government failed to establish an effective unified army, and militias promoting or defending the interests of the leaders of the various religious and ethno-religious groups became a de-stabilising influence.

During the war of 1947-1949, many Arabs fled to Lebanon from northern Israel. Some became well established, with Palestinian students becoming influential at the American University in Beirut. However most lived in refugee camps, denied Lebanese citizenship and equal rights to employment.

After being expelled from Jordan in 1970 following the “Black September” conflict with Jordanian government forces in 1970, the PLO moved the centre of its activities to South Lebanon. In the area adjacent to Israel’s northern border, the PLO effectively established a “State within a State”, and the region became a staging point for infiltration into Israel and rocket attacks on Israeli towns.

The PLO presence precipitated the Lebanese Civil War of 1975, between Christian and Muslim and PLO militias, in which approximately 70,000 Lebanese were killed. During this period some 35,000 Syrian troops entered Lebanon. 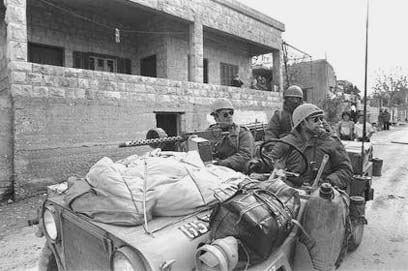 In 1978 Israeli forces invaded southern Lebanon, in a short incursion aimed at eliminating the PLO bases. Israel withdrew after a UN peacekeeping force (the UN Interim Force in Lebanon -“UNIFIL”) was put in place by resolution 425, which also called for the withdrawal of all foreign forces from Lebanon. A gate in the border fence at Metulla in Northern Israel was also opened, and this provided daily access for Lebanese workers employed in Israel.

Causes of the 1982 Invasion

By 1982, the PLO presence in South Lebanon had become increasingly powerful, with a large build-up of arms, and supported by the Syrian presence. Israel now had two aims: the stated objective of removing the PLO threat from the border region; and an unofficial hope that an alliance with the anti-Syrian Lebanese forces might result in the eviction of the Syrians and the conclusion of a peace treaty with Lebanon. The immediate cause of the war was the attempted assassination by the PLO of Israel’s ambassador to the UK, which left him paralysed. 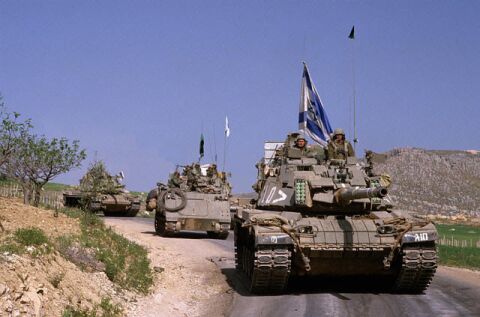 “Operation Peace for Galilee” was launched on 6th June 1982. Israel’s air force attacked PLO bases near Beirut. The PLO then bombarded several settlements in Northern Galilee. The next day, Israeli troops crossed the Lebanese border, and as they passed through the villages in the border area, they were met with demonstrations of welcome as liberators.

Syrian radar was jammed, and in the ensuing air battles 96 Syrian MIG fighters were shot down without Israeli loss.

As abandoned PLO bases were taken, the Israelis found large stockpiles of heavy armaments, and some thousands of tonnes of arms and ammunition were eventually seized. They also found documentary evidence of Soviet-supported training schemes for international terrorist organisations such as the Italian Red Brigades, the German Baader-Meinhof group, and the Japanese Red Army.

The original aim proclaimed by Israel (and as stated to the Israeli cabinet by Defence Minister Ariel Sharon) was to establish a forty-kilometre buffer zone north of the border, eliminate PLO influence, and then withdraw.

However, when the main PLO force fled to Beirut, Israel’s troops followed them to the outskirts of the city. During this time there were fierce engagements between Israeli and Syrian forces on the Beirut-Damascus road, but without escalation to formal war between Syria and Israel.

Some 15,000 PLO fighters moved into the residential area of West Beirut, which is predominantly Muslim, and which was divided from Christian East Beirut by a “no-man’s land”. The Christian militia refused to engage in street fighting against the PLO forces.

Israel then bombarded the PLO centres in West Beirut with tanks and artillery, causing damage to buildings and civilian casualties, which were widely televised and aroused international condemnation. In July 1982, 100,000 Israelis rallied in Tel Aviv to protest against the conduct of the war.

On 12 August 1982, Arafat agreed that the PLO would leave Lebanon. A truce was arranged, and a multi-national force including 1800 US marines arrived in Beirut. On 21 August 1982 Arafat and the PLO leadership were evacuated to new headquarters in Tunis, and the PLO fighters were dispersed to Tunisia and Syria. Israeli soldiers linked up with the Lebanese Christian forces who controlled East Beirut, and Israel then withdrew from Beirut as a multi-national force took over in August 1982.

On 23 August the Maronite Christian leader Bashir Jemayel, was elected President. On 14 September he was assassinated, and a Palestinian group claimed responsibility for the assassination.

On 18 September a massacre occurred in the Sabra and Chatilla refugee camps. Israel facilitated the entry of Christian militiamen into the camps in order to mop up PLO armed resistance. Instead some hundreds of Palestinians (reports of the numbers vary between 474 and 2300) were massacred by the militia, in revenge for the assassination of Jemayel, as well as for the killing of Christian civilians by the PLO at the town of Damour in the previous year. Israel was accused of complicity, and bore the brunt of the international scandal.

400,000 Israelis demonstrated in Tel Aviv, demanding a judicial inquiry into the massacre and withdrawal from Lebanon. A Commission was appointed, and it found that Israeli armed forces were not responsible, but that Defence Minister Ariel Sharon ought to have been aware of the danger of acts of revenge, and that he should resign from his position as Defence Minister.

After the murder of Bashir Jemayel, his brother Amin Jemayel was elected President on 21 September 1982. Like his brother, he refused to sign a peace treaty with Israel. However in May 1983, after negotiations with the US, and indirect communication with the Syrians, he eventually signed an agreement to “end the state of war” on the basis that Israel and Syria would both withdraw from Lebanon.

Syria refused to withdraw its forces, and Israel also remained, since withdrawal would in effect be a surrender of Lebanon to the Syrians. Indeed when Israel did withdraw from the Shouf mountains in July 1983, Syrian-supported militias killed over 1000 people in the Maronite villages.

In October 1983 the headquarters of the US marines in Beirut were blown up by suicide bombers and 241 marines were killed. In February 1984 the multi-national force was withdrawn. 40,000 Syrian troops moved into the Beka’a valley. The Hezbollah (“party of God”), formed in 1982 by Shi’ite Islamic militants with guidance and support from Iran, became increasingly active, and pro-Syrian and anti-Syrian Christian militias fought each other.

In March 1984, under Syrian pressure, the “end of war” accord signed in May 1983 was formally cancelled by the Lebanese government.

It was not until 1985, with Shimon Peres of the Labour party as Prime Minister in a national unity government, that Israeli forces were withdrawn to a 10 kilometre “security zone” in south Lebanon

Results of the war

1. The PLO threat in Lebanon was eliminated. It is arguable that the PLO impotence from its Tunisian base was one of the factors which made the Oslo Accords a possibility.

2. Syria moved more military forces into the vacuum left by the hostilities, and achieved effective control over the affairs of Lebanon.

3. Israel withdrew to the 15 kilometre “security zone” in south Lebanon. An alliance was formed with the mainly Christian South Lebanese Army, but this was not sufficient to contain the Hezbollah, supported by Iranian arms and finance, and encouraged by Syria, which became a dominant force in the area.

By 1985 the Hezbollah had become a dominant force in South Lebanon. A central feature of its ideology was the destruction of Israel. Weapons were supplied by Iran with the assistance of Syria, and included Russian built mortar rockets known as “Katyushas” which were fired across the border at Israeli towns and settlements.

A countervailing force was the South Lebanon Army, which was mainly, but not entirely, Christian, and which received support from Israel.

The firing of Katyushas, and the continuing guerrilla war against Israeli forces in the security zone and against the SLA continued throughout the 1980’s. The campaign intensified as Syria gained greater influence in Lebanon, especially after the Syrian defeat of the Christian militia of President Michel Aoun in 1990.

In 1991, Israel launched “Operation Accountability” against the Hezbollah bases, and withdrew after agreement was reached to stop cross-border attacks, while maintaining Israeli presence in the security zone.

In 1996, Israel again reacted to Hezbollah attacks in an operation which it called “Grapes of Wrath”. Civilians were warned to vacate the area before hostilities commenced. However in one tragic incident, civilians sheltered in the UN compound at Kafr Kanna which the Hezbollah gunmen used as a base for opening fire, and 105 people were killed in the artillery response.

The operation ceased when the US mediated a new agreement to stop the cross-border rocket attacks. Meanwhile the guerrilla warfare in the security zone continued, with a steady drain of Israeli casualties. 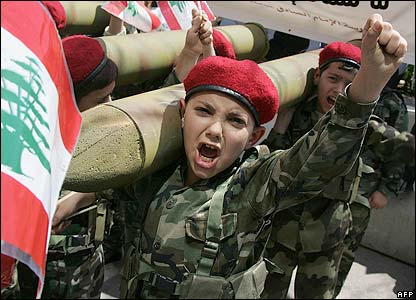 Other Christian groups
Latin, Syrian and Armenian Catholics and Protestants.

Sunni Muslims
The majority branch of Islam, following the “tradition”.

Shi’ite Muslims
Followers of the Shi’a ( “party”) of Islam which does not recognise the legitimacy of the Caliphs who succeeded Mohammed. Affinity to Iran. Represented by the Amal party, and the Hezbollah.

Druze
Followers of a non-Islamic religion, with secret traditions. In Lebanon they have an affinity to Syria, since Syria has the largest Druze population. (The Druze in Israel support the state and volunteer as a group for the Israeli army.)

Note: The inhabitants of South Lebanon are mainly Shi’ite or Christian.
There has been no recent census in Lebanon as a matter of principle.